A passion for real estate

Kishore Buxani, who heads the Buxani Group, has a nose for sniffing out undervalued assets, reports Kalpana Rashiwala 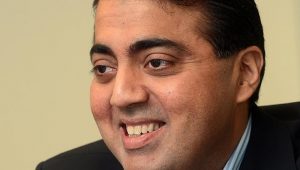 ‘We look for well-located older properties below replacement cost and which are under-performing, under-rented, under-used and under-appreciated.’  – PHOTO: ARTHUR LEE

KISHORE Buxani had a headstart in the real estate business. When he was 12, he and his elder brother Haresh started ploughing through the classified ads to help their mother find a home for the family. One apartment in Meyer Road – a 1,250 sq ft unit with 999-year leasehold tenure – caught their eye.

“When we finally bought it in 1986, it was at $165,000. But I remember having looked at it earlier in 1983, when it was $380,000,” says the 40-year-old, who heads the Buxani Group. His early experience and the skills he later gained at Goldman Sachs helped to hone his real estate investing strategy. He concentrates on what he understands best, that is, Singapore commercial real estate, seeking undervalued properties, adding value to them, and holding them for the long term.

Market watchers say making shrewd property investments is a family trait for Mr Buxani. His mother, Indra, is a sister of Royal Brothers founders Raj and Asok Kumar Hiranandani – although Buxani Group is fully owned by Mr Buxani and not linked to his uncles. Mr Buxani has a nose for sniffing out undervalued assets. “We look for well-located older properties below replacement cost and which are under-performing, under-rented, underused, and under-appreciated.”

Part two of this strategy involves value-addition. “We actively manage the asset postacquisition through refurbishment, repositioning or tenant remixing.” Founded in 2003, Buxani Group owns Katong Junction, a stake in Finexis Building in Robinson Road, four floors in Samsung Hub, and strata office units in Parkway Centre. Its partner in these four investments is a group of offshore investors advised by Seychellesbased Capital Management Group (CMG).

Apart from these joint investments with CMG, Buxani Group owns more than 10 shophouses in Chinatown and Little India along with strata offices at International Plaza and Malacca Centre, and strata shops in the Orchard Road belt – in Far East Plaza, Lucky Plaza and Orchard Towers. Outside Buxani Group, Mr Buxani owns a few properties with his brother.

“As of today, I don’t own shares, bonds, foreign currencies. I’m not trying to be Warren Buffet, but I really believe you have to focus on what you understand. All my investments are in real estate, all in Singapore.”

But things could change in the near future, he tells The Business Times in an interview at his office in Samsung Hub in the CBD. He points out that good value can be found in some small and mid-sized local listed property developers controlled by families with decades of experience. Some of these counters are trading at low earnings multiples and below book value, despite the recent run-up in share prices.

“We are exploring the possibility of acquiring a strategic non-controlling stake in one of these companies, where the focus is to be complementary and possibly add value to the existing management,” he says. And while Singapore will remain the group’s focus, Mr Buxani says he is open to “coinvesting in compelling opportunities with trusted partners in locations where they have strong local knowledge”.

Mr Buxani, now a Singapore citizen, was born in Johor Baru, where his father was a civil servant. His mother ran her own clothes retail business. After his father died of cancer in 1983, the family moved to Singapore the following year. With insurance money received after his father’s death, the family bought the Meyer Road apartment. During weekends and school holidays, the young Kishore used to help out at relatives’ shops in the Orchard Road area, getting his first insights into the retail business in the prime shopping district. “When my mum bought a home in 1986, and my brother and I helped to shop for it through the Classifieds, that started the whole looking at real estate thing. We later saw how property prices went berserk in the 1990s, and in 1997 when prices tumbled during the Asian Financial Crisis, we saw how people lost their pants.”

In 1995, while pursuing his Bachelor of Business Administration degree at the National University of Singapore, Mr Buxani was picked for an internship with Goldman Sachs in Singapore.

After graduating the following year, he joined the US investment bank as a financial analyst. He later built up an asset management business within the bank’s investment management division, advising and managing assets for ultra high-net worth family groups and corporates. Back then, his speciality was spotting undervalued companies. While still in Goldman’s employment, Mr Buxani began investing in Singapore property in 2000, “using every dollar of my income at Goldman Sachs”.

Initially he bought freehold strata shops in the Orchard Road area at about $2,500-3,000 psf. “Net property yields were 5.5-6.5 per cent, though interest rates were, of course, much higher than today. Assuming you put down 25 per cent equity, borrowed 75 per cent and if the rental income was enough to cover the monthly loan instalment payments, property tax and maintenance fees, then by the end of your loan period of 15-20 years, you would have paid off your loan, and gained full ownership of the property (without any outstanding loan). Assuming there are no changes in rental and capital values, the initial 25 per cent equity investment will become 100 per cent – which means you would quadruple your equity. And having been at Goldman, managing money, trust me, it’s not easy quadrupling your money in such a conservative manner in the global financial markets over the same holding period.”

That’s not all. “Now the real kicker is: if you buy the property at a good time of the property cycle and capital values do actually appreciate, then the returns could end up being an 8-10 times multiple of your initial equity investment!” Mr Buxani went on to purchase more strata shops – some on his own and some with his brother. Next, he ventured into shophouses during the Sars period in 2003, paying about $500 psf on built-up area. “Prices were half the 1996 peak and shophouses were giving you like 7 per cent net yield,” he recalls. Later that year, he set up Buxani Group as a holding company for some of his investments.

In April 2005, he resigned from Goldman Sachs, where he had risen to executive director in the investment management division, to focus full-time on his passion for investing and managing real estate. “When I left Goldman, I was advising on/managing assets of about US$1.1 billion and many people could not believe I was leaving a comfortable position that I had built up to just focus on real estate investments,” says Mr Buxani. “I truly believe that if you really enjoy what you do and focus on it, money will follow.” Also in 2005, he began acquiring strata office units at about $600 psf.

In late 2006, Buxani Group and CMG picked up GMG Building (later renamed Finexis Building) in the CBD at $875 psf on strata area after it went though an expression of interest without netting a buyer. “A lot of people don’t want to get involved in old buildings. It’s a lot of hard work. But it’s fine, I enjoy doing that. It took one year to vacate the building and then 15 months to refurbish it at about $6 million,” he recalls. In 2011, he and CMG sold a half stake in the company that owns the asset at $2,043 psf.

In early 2007, the partnership paid a relatively attractive $1,560 psf for six floors in the 999year leasehold Samsung Hub, dubbed the “tilting building” for developing a 0.1-degree tilt during its construction. Even though the main contractor Samsung had earlier rectified the problem, the stigma persisted when the Buxani-CMG partnership bought their space from OCBC Properties. Since then, the Buxani-CMG tie-up has sold two of the floors at $2,800 psf in 2011 and $3,000 psf last last year, reaping a handsome profit. “Today Samsung Hub may possibly be the strongest building in Singapore because it was massively fortified by the contractor,” he quips.

His advice to real estate newbies is: “Take a long-term view on real estate And don’t get swayed by short-term hype, herd mentality or emotions.”

“Secondly,” he says, “do your own research about the specific type of property you intend to purchase, and look at existing secondary prices in the vicinity, rental yields, vacancy, etc.”

The self-declared workaholic enjoys travelling, usually with his family. “When I’m travelling, I around leisurely, just enjoying the local sights, sounds, food and people.” like to immerse myself in the local culture and way of life. Typically, I hire a car and drive