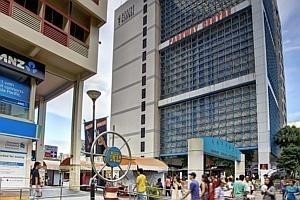 Parkway Centre: Expected to benefit from the continued rejuvenation of the Marine Parade/Joo Chiat area, including the future Eastern Region MRT Line.

TWENTY-TWO strata office units at Parkway Centre in the Marine Parade Central area have been put on the market at $1,700-$1,800 per square foot. Inclusive of a 3 per cent early-bird discount for this month, the price range works out to $1,649-$1,746 psf.

Ranging from 732 sq ft to 1,356 sq ft, the units are located on various floors from the third to the top level of the 13-storey retail and office complex, which is on a site with a balance lease term of about 66 years. Some of the units are adjoining, presenting the potential for amalgamation into a larger contiguous area.

The biggest such space is on the fifth floor, where six adjoining units adding up to 5,748 sq ft are available at $9.933 million or $1,728 psf after the early- bird discount. CBRE is the sole marketing agent for the 22 units, which are the balance units of a stack of 51 office units acquired in 2012 by Parkway Investment Holdings, a special-purpose vehicle jointly owned by Buxani Group of Singapore and offshore investors advised by Mukesh Valabhji of Seychelles-based Capital Management Group (CMG).

The 22 remaining units, which have been put up for sale by private treaty, are mostly tenanted, with lease expiries between November this year and July 2017, although Parkway Investment has deliberately kept a few units vacant to ease sales to end-users.

“When we bought the 51 units two years ago, their passing rents based on existing leases at the time were $4-$4.50 psf a month. Since early last year, rent renewals and new leases have been done at $6 psf,” said Kishore Buxani, director of Parkway Investment and CEO of Buxani Group.

“Based on $6 psf monthly rental, the early-bird pricing translates to a gross yield of 4.1 per cent to 4.4 per cent,” said Mr Buxani.

The common areas in the building are being upgraded. As well, the property is expected to benefit from the continued rejuvenation of the Marine Parade/Joo Chiat area, including the future Eastern Region MRT Line.

Sammi Lim, associate director, investment properties, at CBRE, said: “We expect the property to attract strong interest from corporates, education centres, private-equity firms, as well as high net worth individuals and family offices. Interest from overseas buyers looking for quality and strong yielding assets, with potential rental and capital appreciation in the mid to long term are also expected.”

Moreover, as Parkway Centre is on a site zoned for commercial use, both locals and foreigners are eligible to buy the office units on offer, with no additional buyer’s stamp duty payable on the purchase price nor a seller’s stamp duty (SSD) on disposal of the units later – unlike for residential property.

The 22 units have a combined strata area of 23,819 sq ft, translating to 20 per cent share value of the entire building – which could make them appealing to bulk buyers eyeing ownership of a portfolio of commercial units with a steady income, with the option of selling the units individually in future.

Furthermore, control of 20 per cent share value will provide a single owner with influence on any future collective sale of the entire development, said Ms Lim.

Six Senses To Open On The Private Island Of Felicite In The Seychelles
Samsung Hub floor sold at S$3,225 psf