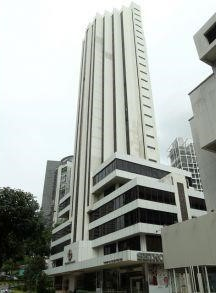 Thong Sia Building: Raffles Medical Group is selling its eight strata-titled units in the building along with the RMG unit that owns them. –

RAFFLES Medical Group (RMG) is selling the commercial podium of Thong Sia Building to Kishore Buxani, managing director of the Buxani Group, for $120 million, more than two years after paying $92.08 million for it in February 2011. With the sale of the eight strata-tiled units in Thong Sia Building – the freehold mixed-use commercial and residential property at 30 Bideford Road, opposite Paragon shopping and medical centre – along with the RMG unit that owns them, the group expects to book net gains of $40.8 million.

RMG bought the eight retail and office units, which range from 710 sq ft to 8,826 sq ft and are located on levels one to seven of the building, with the intention of converting them into a specialist medical centre. That was meant to have expanded RMG’s specialist medical practice to the Orchard Road vicinity, “to meet the growing demand of local and foreign patients for high quality medical services”, the company said.

However, after failing to secure the necessary government approvals for such a conversion, the group put the units up for sale through a tender in June.

On Monday, RMG entered into an agreement with Mr Buxani, to sell him the entire issued and paid-up share capital of Raffles Medical Management (RMM) – the RMG unit which owns the Thong Sia units – within 14 days, or a mutually agreed later date. If the sale of the subsidiary does not go through within that time frame, RMG will proceed to sell the property to Mr Buxani for $118 million – the tender offer made by Mr Buxani.

Both the sales price for RMM and the property were arrived at on a “willing buyer and willing seller” basis, and the sales share consideration takes into account the net asset value of RMM and a mutually agreed property value of $120 million.

The sale was managed by Jones Lang LaSalle, whose independent professional valuation put the fair value of the property at $98 million as at Dec 31, 2012.

RMG said that the net gain on the proposed RMM disposal and the proposed property proposal will be $21.4 million and $19.4 million, respectively. Proceeds will be used for working capital and to fund future investments, acquisitions or business opportunities. The group said the disposal will not have a material impact on its profitability.

18th floor of Samsung Hub goes on sale
Half stake sold in Finexis Bldg at $2,300 psf on strata area