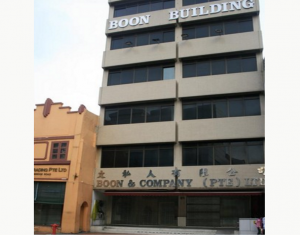 Boon Building: The 999-year leasehold property was last transacted for about $9.5 million in August 2007. It’s being sold with vacant possession through a tender exercise that closes on Dec 17

PLAYERS in the property investment sales market have just been offered two properties – an industrial plot at Kaki Bukit Avenue 4, made available for application through the government’s reserve list, and Boon Building, a six-storey commercial property at 61 South Bridge Road.

The Kaki Bukit site is 323,133 sq ft and has a 2.5 plot ratio, which means the maximum gross floor area works out to a whopping 807,833 sq ft. It is zoned Business 2 – suitable for a range of uses such as clean/light industry, general industry and warehousing – and offered with a 60-year lease.

Under the reserve list system, the site will be launched for tender by the state only if a developer makes an application with a minimum bid price acceptable to the government.

Colliers International director (industrial) Tan Boon Leong reckons top bids for the plot – assuming a tender takes place now – could come in at $70-80 per sq ft per plot ratio (psf ppr). This works out to a land cost of about $56.5 million to $64.6 million.

According to Mr Tan, the plot is in a lesser location than an earlier plot in Kaki Bukit Road 2 that was sold in August this year after attracting a total 18 bids. ‘The latest plot is farther away from the main mature industrial estate in the Kaki Bukit/Eunos area,’ he said.

The earlier plot was awarded to KNG Development for $12.1 million or about $105 psf per plot ratio. It is about 1.07 hectares with a 1.0 plot ratio and is also zoned for Business 2 use, but came with a 30-year lease.

The latest plot, in Kaki Bukit Ave 4, is likely to appeal to developers, who may then build landed terrace factories to sell to end-user industrialists, as well as flatted factories, Mr Tan suggests.

‘Perhaps some of the unsuccessful bidders at the earlier tender may bid for the latest plot,’ he said. ‘However, as the latest site is much larger in terms of land area as well as gross floor area, developing it will entail a bigger investment. Hence, it will likely fetch a lower psf ppr unit land price.’

Boon Building, a 999-year leasehold property, is being sold by Raffles Point Holdings, controlled by property investor Kishore Buxani and his family. The indicative guide price is $12-13 million, which works out to $1,165 to $1,262 psf based on the estimated net lettable area of 10,299 sq ft.

According to caveats records, the property was last transacted for about $9.5 million in August 2007. It will be sold with vacant possession and is being marketed by DTZ through a tender exercise that closes on Dec 17.

DTZ senior director for investment advisory services Shaun Poh said: ‘The property’s appeal lies in the building’s excellent location and investment quantum. The availability of naming rights also offers the opportunity to carve out a flagship building with its own corporate identity.’

Mr Buxani and his partners also own 108 Robinson Road and six floors of Samsung Hub.